Dr Lillian Roberts graduated from the University of Missouri College of Veterinary Medicine in 1987, and moved to California for a private-practice internship.  In 1989 she went to work for the local Animal Emergency Clinic where she stayed for 8 years, eventually publishing the book “EMERGENCY VET: True Stories From the Animal ER.”  She opened Country Club Animal Clinic in 1996, with the mission of offering customized care to discerning pet owners throughout the Coachella Valley.

After over 30 years in practice, she still loves what she does.  “I’ve known some of my clients for decades,” she says, “And many are personal friends.”  She focuses especially on dentistry and medical cases, but enjoys seeing wellness visits too.  “These are a chance to connect with pet owners and address any minor concerns they may have without the pressure of an active health issue.”

When not at the office, Dr Roberts enjoys outdoor activities including hiking and bicycling, as well as world travel for nature and wildlife photography.  Many of her photos can be seen on the walls of the clinic.  She shares her home with two middle-aged cats, and two feline senior citizens share her office space.  Dr Roberts is a long-time contributing member and Member Representative for VIN, the Veterinary Information Network.  She serves on the board of Coachella Valley Animal Network (CAN), and has been a member of the Palms to Pines Rotary Club. 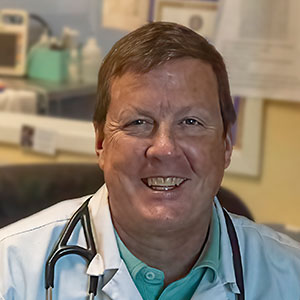 Dr Todd Taylor, a veteran of the US Army, graduated veterinary school at Auburn University in Alabama in 1997.  He immediately moved to California to work with dairy cattle, but quickly became enamored of small animal surgery, so switched gears and became a full time small animal practitioner.

Dr Taylor spent much of his early career working as a contract vet, filling in at numerous practices throughout California, New Mexico and Nevada.  But in 2020 he finally found his “forever home” here in the Coachella Valley.  He joined Country Club Animal Clinic full time in late 2020, and immediately became a crucial part of our team.  “I’ve found my home,” he says of working here.

Dr Taylor loves working with cats, and enjoys surgery most of all.  But he says, “It’s good seeing the healthy pets too, I like to go over preventive measures before there is a problem.”  We think you will love his laid-back style.

When not at work, he spends time hiking, camping, traveling, and riding his motorcycle. 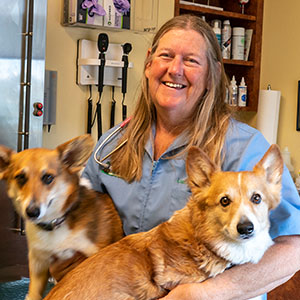 Dr Laura Huston attended prestigious Tufts University in Massachusetts.  After graduating in 1990, she served an internship at Kansas State Veterinary Teaching Hospital before moving to California.

Dr Huston has worked throughout southern California, but keeps returning to the Coachella Valley.  “It’s my home,” she says.  “I can find everything I need here.”  She has helped us out at Country Club Animal Clinic on a contract basis for years, but in 2021 became an official member of our team.

Dr Huston’s heart lies in emergency and critical care medicine, and she enjoys working up complicated medical cases as well as soft tissue surgery.  “I still see something every week that I’ve never seen before,” she says, “And it’s just as interesting as when I first started!”  Her spare time is devoted to riding her show-jumping horses, as well as listening to music, and reading mysteries and non-fiction.  She shares her home with two corgis and a cat. 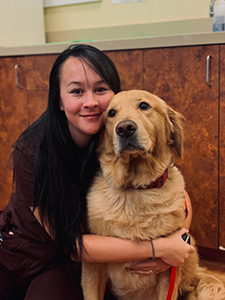 Certified Veterinary Assistant. Ashley joined us in 2016, quickly becoming an essential part of our team, both in the exam room and caring for patients in the clinic. She has a strong interest in veterinary dentistry and helps train new assistants and student interns in the field. Ashley has been Fear-Free certified since 2017. 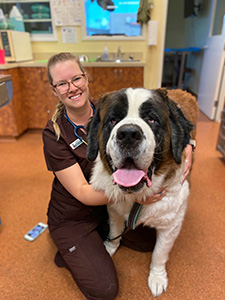 Chelsea has been with Country Club Animal Clinic since 2014, and loves every aspect of veterinary medicine. Earning her Fear Free certificate in 2017, she has a great touch with those nervous cats and dogs who might not be thrilled to see us. Chelsea helps the doctors in exam rooms as well as in surgery, and everything in between. 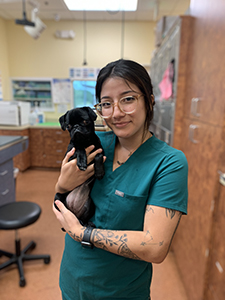 After completing her veterinary assistant training, and two years at another local veterinary practice, Scarlett joined our team in Summer 2021. She’s working on her RVT credentials and expects to become certified within the next couple of years. “I knew I was in the right profession,” she says, “When I was excited to come to work even knowing it would be an eventful and crazy day!” She spends her time away from work with her two fur babies and her many friends. 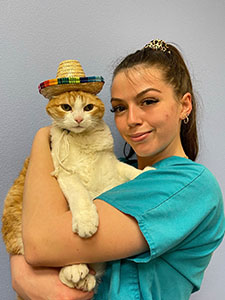 Paige joined our front desk in 2019 as a receptionist and immediately showed great instincts in helping people, as of December 2020 she’s been promoted to Veterinary Assistant. Paige will help you schedule an appointment, greet you on arrival and help make your visit great. 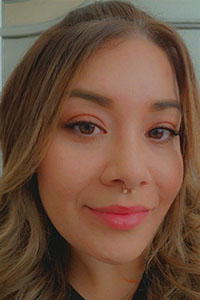 Onnica joined us from another local practice where she had worked assisting in surgery and dentistry. She likes the opportunity to work in a wider range of patient care while bringing these valuable skills to support our doctors here at CCAC! 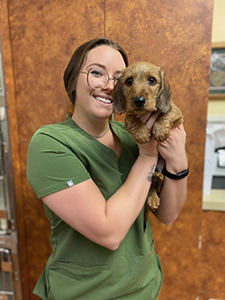 Kaylee has worked as a veterinary assistant for about 10 years before joining our team in 2021. Her calm personality appeals to nervous pets, who seem to settle down when she holds them. Born and raised in the Desert, she has known she wanted to work with animals ever since elementary school. She enjoys spending her time off in nature, hiking, and exploring away from civilization. 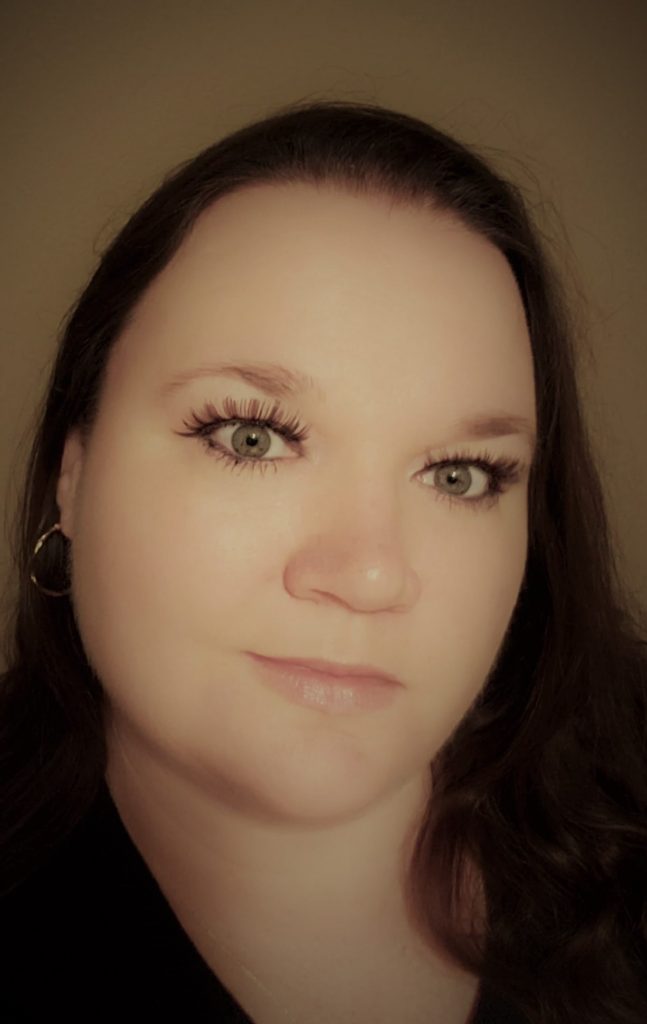 Joining Country Club Animal Clinic in early 2017, Edna has spent much of her working life in the veterinary field here in the Coachella Valley. When the Office Manager position became available in 2019, she was a natural to step into the position. Between client service and keeping the business office running smoothly, Edna has her hands full! 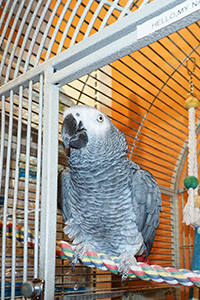 RIP Rocky…. It is with a heavy heart that I post this obituary. “Rocky” passed away quietly at Country Club Animal Clinic at the approximate age of 39 years. Rocky was the perfect clinic bird. He never shrieked, maintained a full set of feathers his entire life and entertained humans and dogs alike with his comments and musical talent. His favorite toys were cardboard boxes and telephone books, which he could reduce to confetti in a matter of hours. Initially found wandering the streets of Palm Desert, this Congo African Grey Parrot already knew his name but, sadly not his address.

After spending two months at the Living Desert without being claimed, he was adopted by Dr. Roberts in 1989 and has since followed her from the Animal Emergency Clinic to Country Club Animal Clinic’s original space and later to our current location. His favorite treats were Nutriberries and grapes. He loved baths, dancing, being the center of attention, and occasionally biting the hand that fed him. He delighted in whistling large dogs to his cage, where he attempted to nip their noses with his sharp beak.

Rocky will be greatly missed! 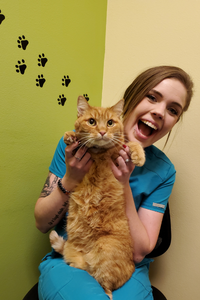 Sammie joined our team in 2022 and quickly became a valued team member. Her cheerful greeting helps clients and pets feel welcome, and she is quick to answer questions or find someone who can. Having moved to the desert from Sherman Oaks several years ago, she lives here with her young son and an assortment of small creatures and helps care for her aging parents and various foster puppies and kittens. In her spare time, she enjoys off-roading on her dirt bike or trophy truck racing. 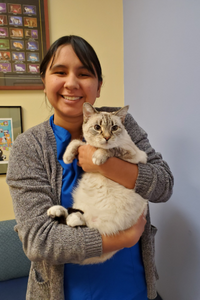 Jennie joined our team in early 2022 at the front desk. She has worked with animals since high school FFA, later volunteering at the Living Desert and working at a pet store before making the transition to a vet clinic. She has an AS in Liberal Arts: Math & Science, and is a desert native. She lives with her parents, two sisters, and multiple pets. She enjoys digital media creation, and travel throughout Southern California. 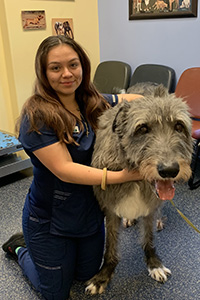 Clarissa came to work at Country Club Animal Clinic mid-2021. Born and raised in Indio, she has been working with pets since high school. She has lived with pets her whole life, and fostered several. She lives with her parents and three younger siblings, as well as three cats, a chihuahua a bearded dragon and a leopard gecko. She enjoys spending time with her family, friends and pets when not at work. 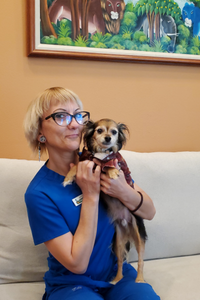 Although Zacky’s work is mostly behind the scenes, you can’t visit Country Club Animal Clinic without seeing her work. Filling a difficult position in 2021, she works tirelessly to keep us clean and tidy. She moved here at age two and has spent much of her working life with animals. She lives with her Chihuahua, Chibbs, and loves horror movies and romantic comedies, listening to music, meditating, and creating arts and crafts. She is also a “proud pescatarian!”

We use cookies on our website to give you the most relevant experience by remembering your preferences and repeat visits. By clicking “Accept All”, you consent to the use of ALL the cookies. However, you may visit "Cookie Settings" to provide a controlled consent.
Cookie SettingsAccept All
Manage consent

This website uses cookies to improve your experience while you navigate through the website. Out of these, the cookies that are categorized as necessary are stored on your browser as they are essential for the working of basic functionalities of the website. We also use third-party cookies that help us analyze and understand how you use this website. These cookies will be stored in your browser only with your consent. You also have the option to opt-out of these cookies. But opting out of some of these cookies may affect your browsing experience.
Necessary Always Enabled
Necessary cookies are absolutely essential for the website to function properly. This category only includes cookies that ensures basic functionalities and security features of the website. These cookies do not store any personal information.
Non-necessary
Any cookies that may not be particularly necessary for the website to function and is used specifically to collect user personal data via analytics, ads, other embedded contents are termed as non-necessary cookies. It is mandatory to procure user consent prior to running these cookies on your website.
SAVE & ACCEPT